Developed by id Software and published by Apogee Software, Wolfenstein 3D was released on May 5, 1992, for MS-DOS. To say that it introduced the world to protagonist William " B.J." Blazkowicz might be a bit of an overstatement. Wolfenstein 3D was as light on plot and character as it was on options for diplomacy. This was not a problem however; as Wolfenstein 3D was heavy on letting you feel like you were escaping from a Nazi prison. Better still, your chosen method of escape was blasting your way through and lots of Nazis in a manner described by reviews at the time as "frighteningly realistic", and "extremely violent".

In 1984, inspired by the movie The Guns of Navarone, programer Silas Warner created Castle Wolfenstein for the Apple II. Released by Warner's company, Muse Software, the game went on to some critical success. You might not be surprised that Castle Wolfenstein, as the progenitor of the Wolfenstein franchise heralded the birth of a new genre in videos games. What might surprise you was that it was not the shooter, but a stealth game. As the unnamed protagonist escaping from a German prison, you had few resources and had to rely on stealth and strategy to find the secret plans and escape.

When asked about his favourite game of all time, Ken Levine, original designer and writer of the fantastic and seminal 1998 stealth game Thief: The Dark Project said: -

I go back and forth. Sometimes it's X-COM, sometimes it's Civilization. Then there are some old school games like the original Castle Wolfenstein and Diablo II. If anything inspired Thief, it was that. 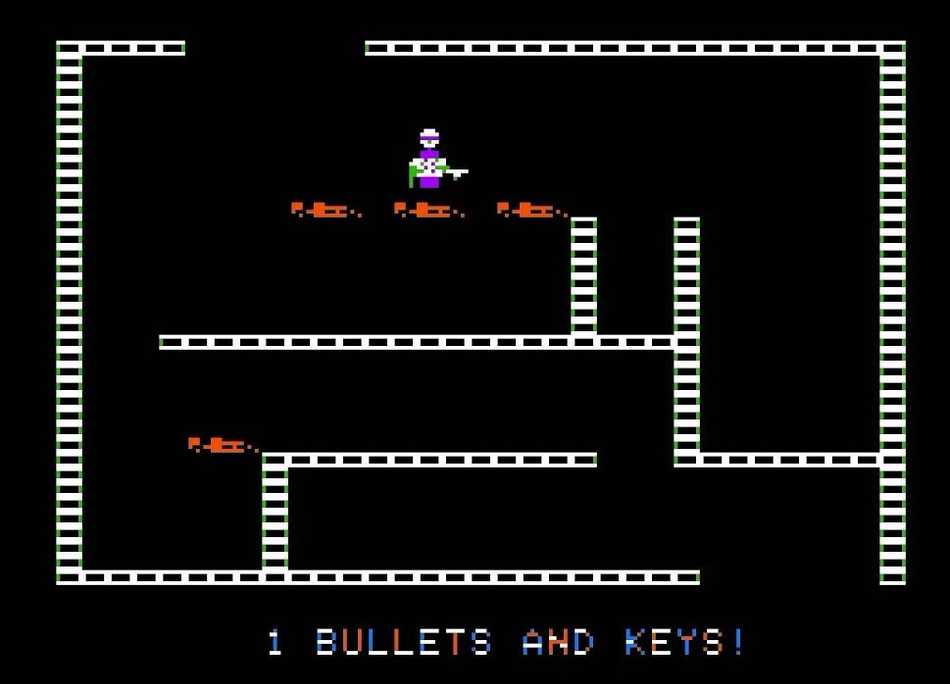 Despite the success of 'Castle Wolfenstein' and the release of a sequel, Beyond Castle Wolfenstein in which the player was on a mission to assassinate Adolf Hitler, Muse Software eventually fell into bankruptcy and was disestablished in 1987. There story might have ended, but Castle Wolfenstein lived on in the fond memories of four teens who went on to form a little gaming company of their own. Their names were John Romero, John Carmack (Carmack), Adrian Carmack (not related to John) and Tom Hall.

In 1990, while still at Softdisk, John Carmack created a way to build smooth side-scrolling games on the PC. This might not seem like much, but at the time side scrolling smoothly was thought to be only possible on console like hardware. Innovation was Carmack's thing, and today he is CTO at Oculus VR, but back then the idea was to create a Super Mario Bros port for PC. The team recreated the first level of Super Mario Bros with some replacement art assets, and a character created by Romero called Dangerous Dave. The cloned Mario level became known as "Dangerous Dave in Copyright Infringement". When they failed to convince Nintendo to invest in a PC port of Super Mario Bros the team went on to develop a new game based on the side-scrolling engine. This was to become Commander Keen in Invasion of the Vorticons. Released for MS-DOS and published by Apogee Software Commander Keen in Invasion of the Vorticons featured eight-year-old child genius Billy Blaze. Billy builds a spaceship and puts on his older brother's football helmet to become Commander Keen. It was an immediate success and the first of the Commander Keen games. However something dark dwelled in the hearts of the new team, and eager to make something a little more edgy the group quietly formed id Software.

As it had with Commander Keen, their next game started with Carmack and an innovative new approach to graphics. Carmack had been working on a new way to render simple 3D environments, and the team had already created a couple of titles using his technique, namely Hover Tank 3D and Catacombs 3D. These games had only seen limited releases and id Software was looking to take things to the next level. Initially, the idea was to make something in space until John Romero suggested a remake of Wolfenstein. As it turned out, this seems like it ended up being the right decision, for now.

The game started out intending to retain the stealth elements of the original, wearing disguises and hiding bodies. But as the game evolved these plans were eventually abandoned in favour of fast and frantic gameplay. As the game grew, realism was increasingly dropped for epicness, and later expansions brought in the idea of the occult, zombie army's and of course, Mecha-Hitler. 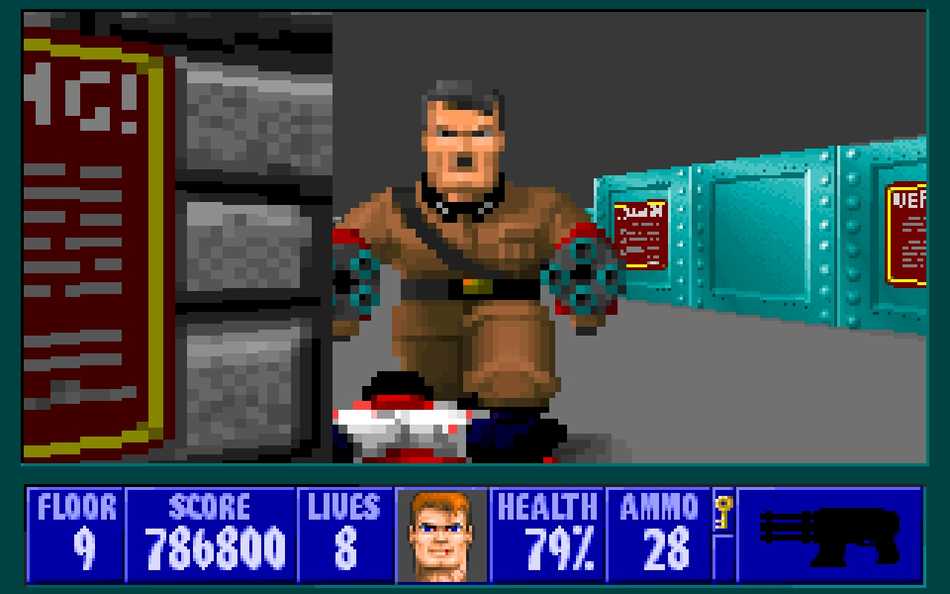 I was fourteen when I first got my hands on Wolfenstein 3D, and there was no doubt that the game felt subversive and a little dangerous; all qualities I valued tremendously at fourteen. Blasting my way through the corridors of Castle Wolfenstein felt raw and violent. Eating dog food to regain health, triggering secret passages that would open up to reveal hidden areas was wild. Video games were still viewed by those who didn't understand them as children's curiosities and violence in games was little understood or considered. Wolfenstein 3D began to change that view.

When I first played 'Wolfenstein 3D,' it blew my mind. It had a big impact on me.

Those looking for historical accuracy were bang out of luck; unless I have been subsequently and impressively misled. I don't remember knowing much about the politics of the German National Socialists at the time and if I'm honest, Wolfenstein 3D did nothing to help correct this historical ignorance. However, some felt the game's depictions warranted being taken seriously. Wolfenstein 3D was banned from sale in Germany in 1994 for its inclusion of Nazi symbols by the Federal Department for Media Harmful to Young Persons. It probably didn't help that the games menu music was, at best, heavily inspired by the Nazi antham. This did not affect me of course; I was not in Germany; and was just happy stalking the corridors, shooting bad guys. I think that you would be hard pressed to make the case that the game was attempting to promote a Nazi adgenda; unless again I have been impressively misled and the Nazi's were just all really into getting shot. If the game was banned in some places that just made it seem all the more epic.

The first person gameplay clearly made the combat more immediate and real. Despite the cartoonesque graphics Wolfenstein 3D's perspective played on the psychology of the gamer in a way few games had previously. As a result, the violence felt more shocking, the actions more personal. It was a little scary; not in the content, but in the potential. Wolfenstein 3D hinted at the kinds of experiences video games might one day bring, and the possible impact of those experiences not just on the gamers, but on society as a whole.

Wolfenstein 3D might not have been the first first-person shooter, but it is the true antecedent of the modern first-person genre. A lineage that includes half-life, Far Cry, Crysis, Call of Duty, Battlefield and even the likes of Overwatch and Fortnight. Not to mention the modern incarnations of Wolfenstein: The New Order, Wolfenstein II: The New Colossus and the soon-to-be-released Wolfenstein: Youngblood. Watching this particular video game genre evolve has been fascinating; especially as I feel I was there at the begining. However, it remains a little scary; not in the content, but in the potential. Thats why I love it.

Following the success of Wolfenstein 3D, id Software went on to develop something that kept many of the same ideas and elements, and at the same time, changed everything. Not everyone noticed Wolfenstein 3D, the games industry was just starting to find its footing; but id Software's next game would grab the attention of the world and cemented the legacy of Wolfenstein 3D. The next game originally had a working title of "Green and Pissed", but later was called simply; DOOM.