The ethical thing to do in any given situation is usually feels pretty obvious; we might not always do the right thing, but we at least know it when we see it. However you might be surprised how quickly an ethical dilemma can suddenly make you question weather you really do know what the right thing to do is.

Lets imagine a train track that at some point will split into two tracks, Track A and Track B. There will be a leaver next to the track that will control which is the currently selected track; and its currently set to Track A. So without needing to do anything, a train coming along the track would end up on Track A. 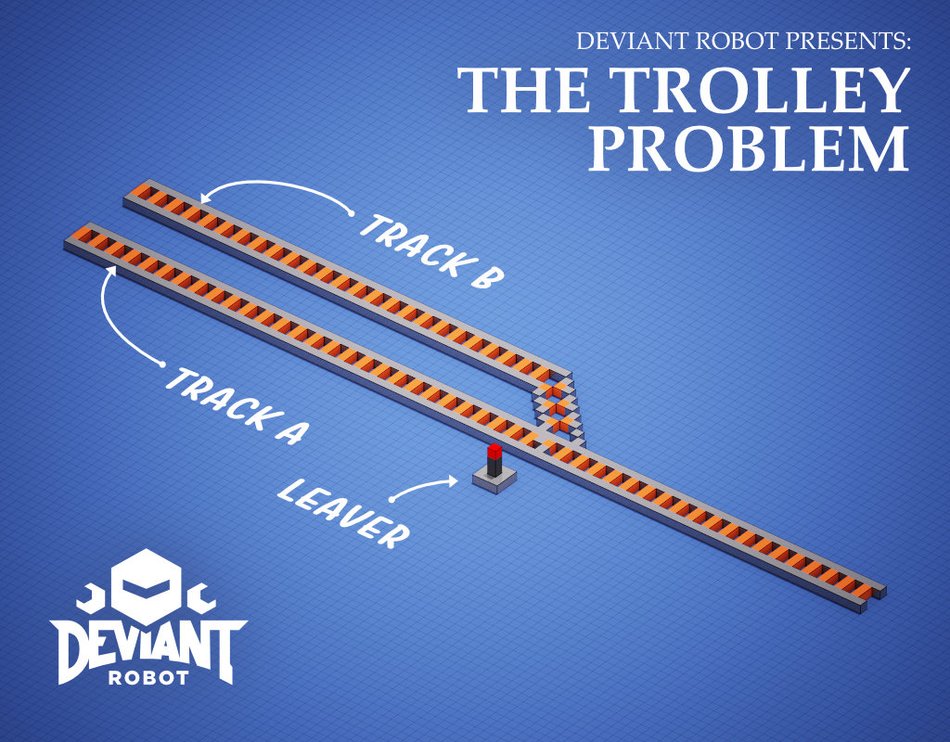 "A tain track that will split into Track A and Track B as dictated by a leaver.
© William Owen

Now let's say there are five people tied up on Track A. We don't know anything about them, but there they are however. 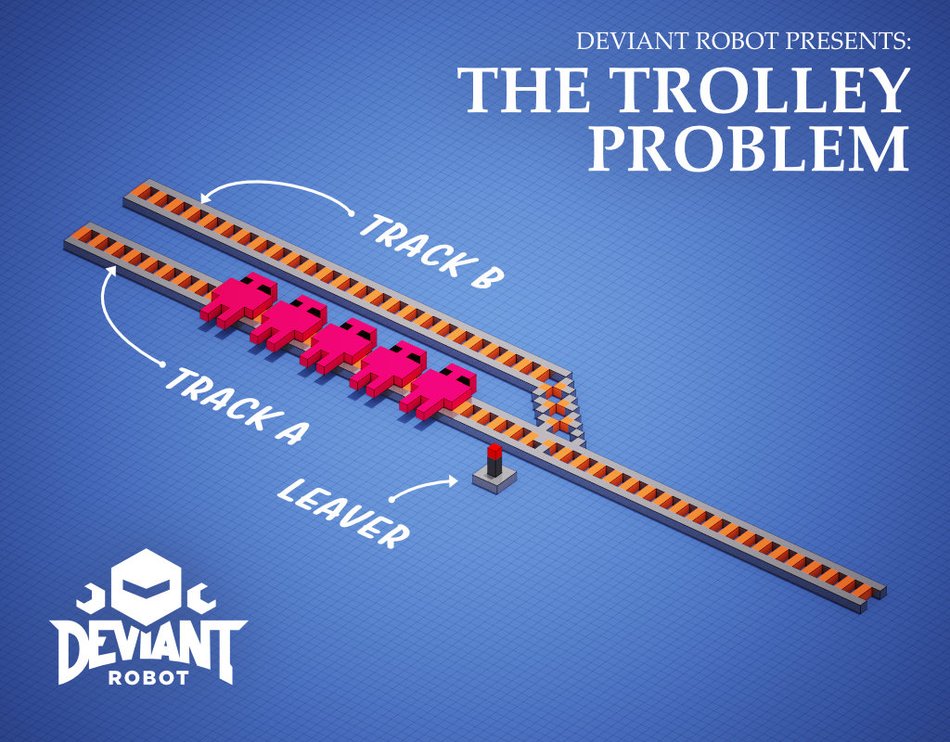 "Five people are tied to Track A.
© William Owen

Now as you might have guest, these poor unfortunate individuals aren't going to be happily relaxing on the train tracks for long. At this very moment a heavy runaway trolley is speeding towards them; there is no one is on board and there is no way to stop it. 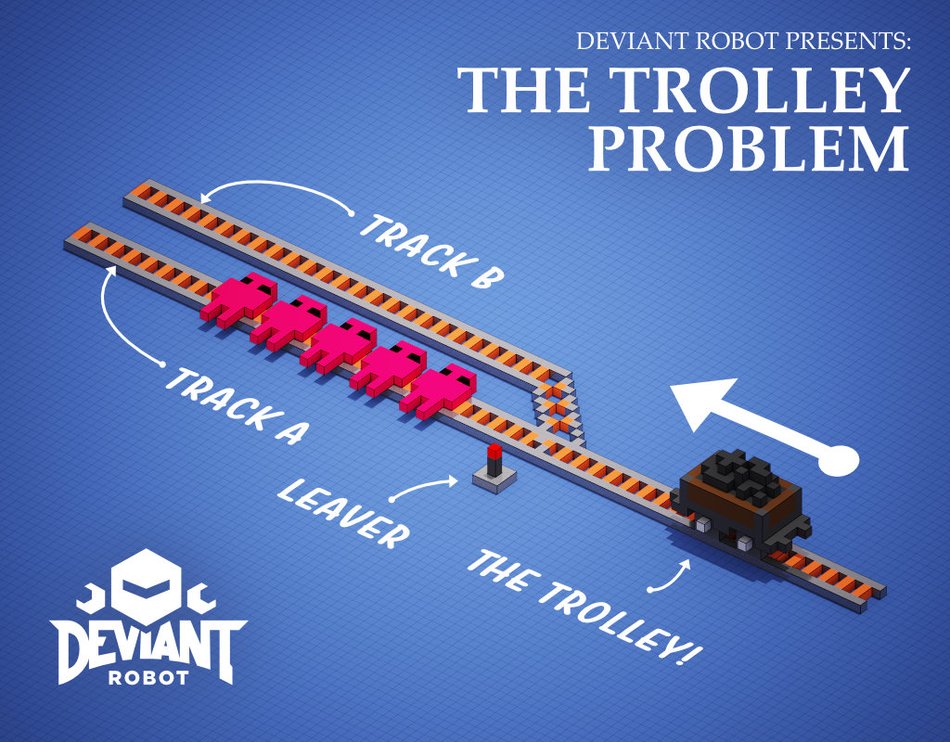 Should you pull the leaver?

Now; should you pull the leaver?

Should you pull the leaver that will cause the tracks to change to Track B and allow the run away trolley to switch to the empty track and avoid the track with the five people tired up on it?

Yes, yes you should. Why on earth would you not. This is a thought experiment and not a puzzle in a badly written video game. It will not turn out that the empty track was cursed and in sending the trolley down it it unleashes an angry dragon who kills millions. No. This is a thought experiment, no hidden factors. Pulling the leaver would save the five people and that's it.

The reason I present this version of the trolley problem first is to make sure the rules are clear. I am sure there are some interesting reasons why you might choose not to pull the leaver in this moment; but I think its safe to say that most people would pull the leaver.

Now, here comes the interesting part. What if Track B wasn't empty. What if there was a single person tied up on Track B. 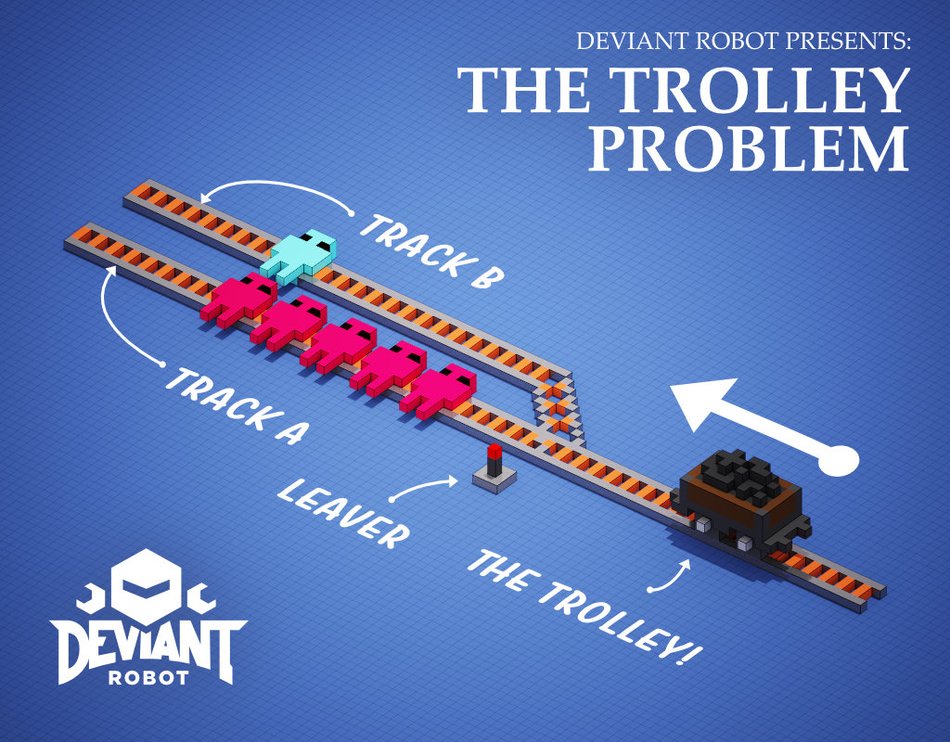 "A heavy runaway trolley is speeding towards the five people tied to Track A, but now one person is now tied to Track B
© William Owen

Now should you pull the leaver?

Should you pull the leaver?

The moment we discover that there is a person on Track B, things get more complicated; and opinions start to differ with regards to what you should do in this moment. In most cases people would agree that pulling the leaver is the right thing to do; and would argue that one person dying is better than five. This is the one verses the many argument and we will get back to this shortly.

Others might argue that you are not involved in the scene, you did not set the trolley loose and you did not tie anyone up on the tracks. However if you pull the leaver you are choosing to act, and you do so knowing it will lead to the death of a person who would otherwise survive. You are in effect causing the death of a person. In response to this some would argue that choosing not to take action, when you know you could, is an action in itself, therefore you would be choosing to allow five people to die through your inaction and are just as responsible for those deaths.

If you still want to stick with the idea of the one verses the many, how about this version of the trolley problem. There is now no leaver and no alternative track; but there are still five people tied up and the trolley is racing towards them. A very fat person is standing next to the track. You know for sure that by pushing the fat person onto the tracks it would stop the trolley, but it would kill the fat person. 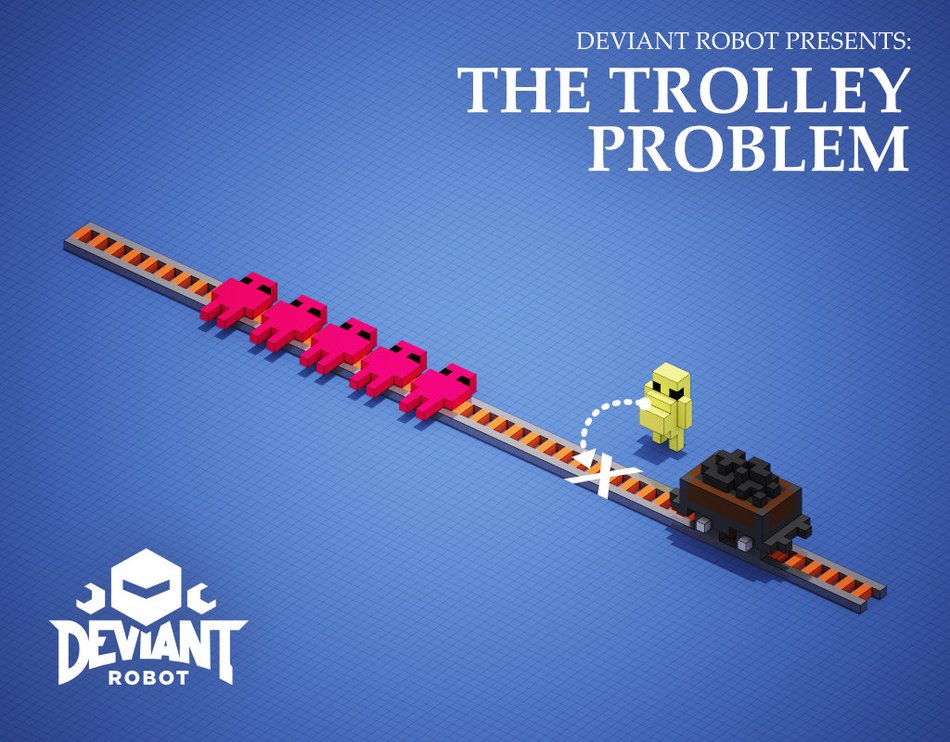 "A heavy runaway trolley is speeding towards the five people tied to the track, a fat person stands by the track.
© William Owen

Should you push the fat person into the path of the trolley?

This feels very different to the situation with the leaver. Many people who would have pulled the leaver and given the one verses the many argument, would not choose to push the fat person. This might seem strange as the effects on life are the same, the one person would die and the five people would survive. However when we need to act by acting on the person it feels more morally wrong than when we took an action that we knew would lead indirectly to the same outcome.

It's worth noting that if you ask this version of the trolley problem first you get a different response than if you ask the leaver version first. This is likely to be because people, having given a one verses the many argument previously, may feel the need to remain consistent.

Some people might suggest that the fat person is an innocent bystander, and not involved in the scene. The implication here might be that those who are tied to the train tracks have in some way chosen to be there, or at least taken action that led them to be there. Well.. what if I were to tell you that the fat person was the person who tied the Five people up on the tracks to begin with. Would that change your view? If it would, would you choose to push the fat person in front of the trolley after it had just killed the five people?

The trolley problem has many versions, and each allows us to think about the moral implication of certain criteria. It's one of my favourite thought experiments and its a great conversation to have with your friends and family, you might be surprised how differently others may choose to answer.